This article has been originally published as part of the column FABBRICATION in XXI magazine, vol.157, April 2017. This article can be accessed here in Turkish.

Let us be clear, we have no divine aim as to put an end to bullshit. There will always be people who does not care, nor take the task at hand seriously and will bullshit. However, it is high time to focus on the most sinister of all the bullshit, and spreads like wildfire. We will barely provide a glimpse into a chronical problem that has even managed to spread to our previous articles with various cases; the bullshit in computational design and fabrication in academia.

The title grown by a reaction diffusion algorithm.

Incorporation of computational design into the curriculum of architecture schools have been quite problematic, to put it mildly. Design of a bottom-up process while not losing sight of top-down decisions is definitely imposing on people with a firm belief that architect is the designer supreme who takes all the top-down decisions. Architect supreme in a faculty of architecture is the academic supreme. Of course he/she knows the best design practices, which somehow always happens to be limited to his/her knowledge. Any revision or any addition should not transform the core, but they can co-exist as insignificant novelties. The Academic Supreme treats the new methodologies and tools as mere eye-candy generators.

What is the difference between the students of architecture here and East Coast or London? Why should not the students here bullshit in a similar way – designing aesthetic façades through decontextualized fluid dynamics analysis?1 As the students are bullshitting superficially while tackling a design problem, we may pardon their juvenile attempt, especially if we heed the words of Michael Beirut.2 In the end, they are investigating computational design methods in the context of a design studio. In the directorship of the Academic Supreme, computational design can only be “taught” in an elective, or become a three-week confusion in the weekly plan of an architectural computer program (il)literacy course.

Let us delve into the contents of this course. If you are lucky, you would be working with someone who is familiar with these methods, yet you would be perplexed by encountering bottom-up design processes in a dictated top-down curriculum in the limited time frame. Your relatively healthy first encounter would be the only consolation in this case. Tough luck if you have a tutor who can only transfer what they have seen in a Youtube tutorial. The golden rule of computational design education bullshit is to break the cause-and-effect relations through the use of out-of-context scripts, which someone else has designed and developed under different circumstances, without questioning any design parameters – instead of building up functional relations. Without further ado, here is a section of the things you would go through in case you are exposed to a piteous process as such…

Instead of building the course structure around a curriculum in which the learners can practice building up a logic using cause-and-effect relations, the tutor would instruct a program on how to triangulate a randomly formed blob without a concern for a design task, and prepare it for laser-cutting. Welcome (back) post-modern! By the end of the third week, “parametric tower design” exercise will be conducted. Here is the recipe: 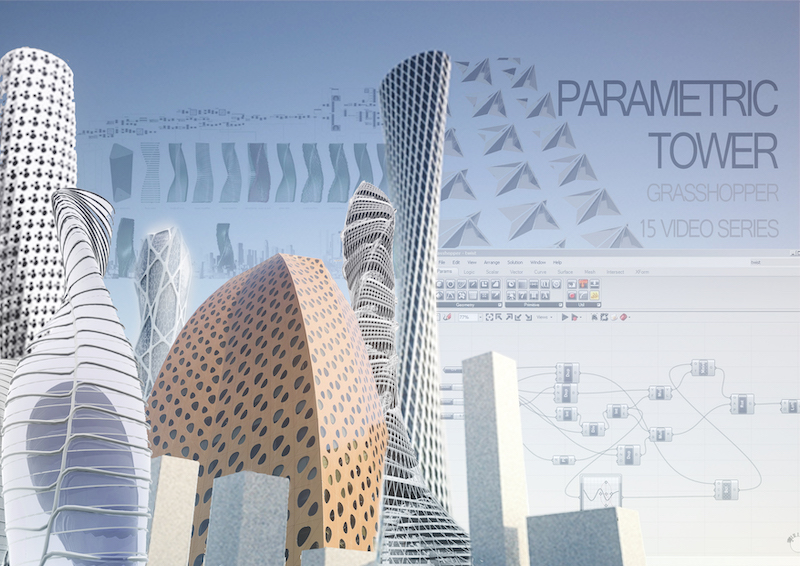 Countless parametric towers – Kas Oosterhuis’s LIWA might even go unnoticed amongst them.

Take a variable (number) and apply a series (an array of numbers with equal or differing step sizes) to create a list of ordered numbers. This series defines how much (vector amplitude) a closed geometry (be it a circle, a polygon, an ellipse – the creative decision is all yours) is transformed (move) in Z axis. If you want an effect similar to that of Calatrava’s Turning Torso in Malmo, just gently rotate all these closed geometries from their centers (area🡪c) with a series of number you define. You now have a design ready for an Evolo competition. Worst case, you can try another axis other than Z, and submit it to a biennial. At least try to embed its production information into the design process in order to deem it computational, perhaps devise connection details in the generative model.

Well, you have to document all these efforts. The sensible choice would be to create diagrams to expose the relations formed at every step of the process in order to transfer the information to others. As the last part of the three-part article on bullshit, you must have realized not to search for a reason in bullshit. The bullshitter utilizes screenshots of the script as an indicator of his/her firm grasp in methodology. The screenshot of a spaghetti code, which has become impossible to comprehend as a result of lack of skills in writing loops, is an x-ray of the mind of the bullshitter. Everything is entangled. It is even possible to encounter this phenomena in dissertations successfully defended. 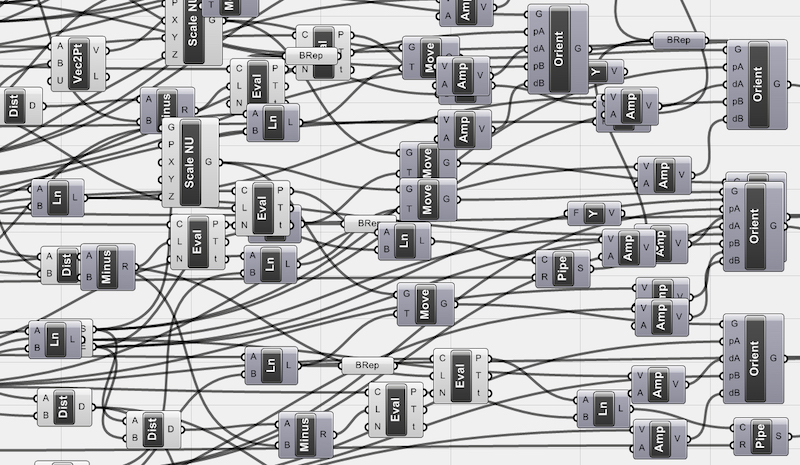 We are confident that this screenshot of a spaghetti code will help explain what this script does.

Obviously, efforts to include computational design in the curriculum of architectural education has not started in 2000s. Beginning from late ‘70s, Shape Grammars – a cult amongst its followers to this day, is one of the first examples of integration of computational design in the curriculum. Primarily introduced by Sting and Gips as a tool for evaluating and reinterpreting arts, it has found it equivalence in architecture by introducing an alternative intuitiveness in constructing a design language through the case study of Palladian Villa analysis3 and Frederick Froebel’s4 methodology. Aside to being a tool for analysis and synthesis, a combination of these functions was utilized to not only map but also devise designs were long in the research process for this methodology when our elephant in the porcelain store decided to degrade this to merely generate Seljuk patterns. It takes a lot of nerve (and experience) to know how to construct a grammar which properly sets the rules between a project’s objectives and constraints and correlate them to correspond functional and aesthetic concerns in design. After all, setting up these connections fundamentally will result in unforeseeable outcomes which the bullshitter might not be comfortable with. Instead, why not swim in familiar waters – why not take a leaf out of the book of Post-Modernists and expect a pattern to serve as a design strategy? Just as shape grammars were dwindling in a vicious cycle, making grammars came to its rescue by introducing production methods and materiality to an extent to help transcend this generative process which was reduced to two-dimensional shape generation, transforming it to a meaningful experimental methodology.

How not to utilize shape grammars – we are really curious to see the spaces that will form with merely two rules and random intersections of three-dimensional masses.

However, all acts of making are not equal. The notion of “maker”, a marketing marvel which the Make magazine has introduced as a synonym for DIY’ers, proves how the act of making became commercialized and banal. As people primarily make something to become a maker, the value of how something is made is lost. The act of making is the new black, it is not important how it is made. Naturally, in a world where anything goes, the Academic Supreme will try to benefit from this paradigm too. There should be nothing more ironic than an Academic Supreme who has never stepped away from his/her immaculately sterile desk to get his/her hands dirty in a workshop, nor has ever touched a hand tool, with no experience with material behavior to conduct an applied building project. There is nothing more tragic to witness people who are not familiar with any designfabrication process to attempt this endeavor.

The reason for this tragedy is due to Academic Supreme quickly forgetting that the production itself is a notion that can be designed. However, he/she has found a way to circumvent this issue masterfully: hacking.5 If it seems not possible to get the desired result, just claim to hack it. A perfect excuse to not set a context and develop a fabrication process. Now, that is the bullshit we love! Because if we mention process design, suddenly everything becomes too real and we might not be cool enough for the kids. Besides, designer does not design – designer hacks.

In the elder days of art
Builders wrought with greatest care
Each minute and unseen part,
For the Gods are everywhere.


This verse by Longfellow was Wittgenstein’s motto6, who had a deep affection towards architecture. The implication is evident. Craftsmen treated even the tiniest of the tasks with great devotion and self-discipline instead of taking short-cuts and cutting corners. It was a result of conscience and self-respect. There was no room for bullshit. Then, why should we bullshit with disregard to our profession while we have all these invaluable tools for design and fabrication processes at our disposal? Can we become better through adapting the ethics of craftsmen of old times?

Rid yourself of FOMO7, you do not have to follow the hype train just because it looks cool as an Instagram story. Take a deep breath and count to ten. Wrap your head around the context of the new technology or the methodology, weigh in its advantages and disadvantages and ponder how you can utilize it. Do not be distracted with the charming precise movements of an orange arm. Challenge the design and the fabrication as a process, and the rest will unravel.

Have we never bullshit? Of course we have. We have been allured with the precise mechanical movements. Yet, we do know not to bullshit in the design of a process. We are aware of our responsibility; take it seriously when it matters and not ruin all the fresh, intriguing, and exciting possibilities for the others, as well as ourselves.